How Social Media Has Changed The World - Season 3, Episode 1 Of The Digital Prosperity Podcast 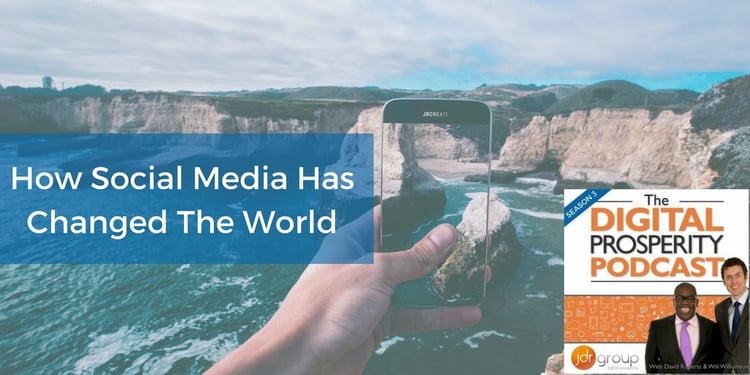 It’s easy as we go about our daily lives to take social media for granted. It’s such an important part of the fabric of daily life. We see it on the news. We see people on social media, in cafes and restaurants using their phones. You hear constantly about Facebook and Twitter. We spend more and more time on it on a day by day basis.

But it can be easy sometimes to take a step back and take stock of how much of an impact that’s having on the world and on business generally. So one of the things that social media has done is made it possible to keep in touch with everybody. I remember in the early 2000s trying to log on to Friends Reunited, get in touch with some of my school friends and finding it very difficult to do so.

The Evolution Of Social Media

I remember when Facebook came along and how fantastic it was to be able to reconnect with people and find out about what was going on in their lives. I know of some friends of mine, good school friends that reconnected and have become really good friends since, whereas otherwise they would probably have drifted apart.

My dad, I remember talking to him about his friends and family. So many people that he would tell me stories about that he had lost contact with simply because either him or they had moved house and then you change your phone number. You change the address. If you lose it or if you don’t manage to pass that on to someone, then that’s it. You can’t get in touch with them ever again and that doesn’t happen these days with Facebook, with Twitter and so on.

The internet, particularly Twitter, has created sense of a global conversation where now everybody can talk to anybody and there is a sense of an ongoing conversation.

It means that ideas and information and entertainment can be shared really, really quickly. It has also turned everyone into a publisher. Every single human being on the planet with a smartphone is now a publisher.

It has also turned every single person with a smartphone into a journalist. So everyone can take photos and take videos. It’s much harder for hate crimes, for misuses of power to go unnoticed and unrecorded and for people to get away with that type of thing. We see video footage of war crimes, of atrocities that otherwise wouldn’t be reported.

It has given every single person a voice and it has meant that some people have been able to rise to become celebrities and become extremely successful in their own spheres, whether that’s in food or exercise or music, whatever it might be, because they’ve been able to use these free publishing platforms.

But you also hear stories of people that have put messages on social media networks and not really taking into account the fact they’re publishing it to the world and it has affected them in job interviews, in their career or later in life.

It has meant that everybody has their own kind of self-image and now also a kind of digital sense of self, of who they are online, a digital identity if you like.

An Effect On News

It has had a big effect on news and how we receive and consume news. One of the effects that it has had speaking in the wake of the US election where Donald Trump became president, there are a lot of stories about how the use of social media to receive your news has created a confirmation bias whereby if you have liberal views or you have conservative views, you tend to only be shown content that reflects those views. So you only get the news that confirms your existing opinions and you don’t a wider broader sphere of different opinions or news stories shared with you and that has an effect on the world.

Finally, social media, for all the good it has done, also whenever you open up a new communication channel, people can use it for good and also for bad and there is a big rise in trolling, in online abuse, online bullying, identity theft and there are all of these kind of negative sides that come with all of the positives.

So that is how it has changed society in general. But it has had a big impact on business particularly. It has enabled brands and companies to start building and creating their own audiences. They have their own publishing channels and they can start to create content for free and publish directly to their own consumers and to their own customers.

It gives everyone their own media channel, Facebook, YouTube, LinkedIn, Instagram, Snapchat, Twitter. These channels are the new ITV, the new Channel 4, the new BBC, and the new Radio 1. It creates a level playing field and small companies, they can produce interesting content and interesting information or entertaining posts online that can compete with the bigger companies.

Now it doesn’t end there though. Social media is still changing and evolving and the people that are at the top of Facebook, of LinkedIn which has just been acquired by Microsoft, the people at the top of Twitter, they have big plans for these platforms and they want to turn social media beyond where it is now and to make it the place that people find products and services, the place that people pay for those products and services, the place where people communicate in their daily lives, where they find information, where they live online.

So we’re going to see these platforms continue to grow. Some will come. Some new ones will come. Some of the ones that we know now will go and will fall by the wayside. But social media is going to continue to play a bigger and bigger part in our daily lives and this is a tremendous opportunity. However, most businesses, they underplay the importance of social media. They sometimes dismiss social media and many people who try and use it don’t use it effectively.

But like the radio, like telephone, like the television, like the fax machine, like the introduction of email, social media is a development which is not good or evil. But it is a tool that we can all use and it is not going away. So we had all better get good at it!

Now if you’re using social media in your business and you want to know how you can make it more effective, myself and the lovely folks at the JDR Group have put together a great free resource for you – The Ultimate Social Media Daily Workout Guide.

This is a 20-minute daily rating for you to follow where spending just 20 minutes a day on your various social media channels will start to deliver results that can help you expand and grow your company. For future questions, please send them to podcast@jdrgroup.co.uk.

All companies need to engage in marketing activities if they want to succeed long term – you can’t...

How To Strengthen Your Company’s Unique Selling Proposition (USP)

Your Unique Selling Proposition (USP) is what defines the uniqueness of your business in a...

How To Boost Your Sales And Marketing ROI Post-Covid-19

While the modern business world has dealt with downturns before, the current situation is unlike...