Why You Should Use Twitter As Part Of Your Marketing Strategy

There are 192 million users registered on Twitter, and that number is growing everyday. You've probably used it for breaking news, latest sports scores, and keeping up with your favourite celebrities. But, there's so much more to Twitter, and it can be used to propel your marketing strategy today!

Why You Should Use Twitter As Part Of Your Marketing Strategy

Twitter, regardless of any uproar and bad media coverage, is still a fantastic platform for your business to generate leads. The amount of active Twitter users is huge and if you use the social media site correctly then you could attract a bundle of new customers for your business. Here are some steps you can follow to improve your business’ Twitter presence and visibility.

The first step to gaining more visibility on Twitter is to get more followers. It is fairly simple enough to use the Twitter search function to find potential prospects that may be interested in the products and services you offer. You should actively follow users that follow any of your competitors or are tweeting about anything that is related to your industry. Also, interact with like-minded individuals by quoting tweets and responding, favouriting and liking. If a user follows you who is a potential prospect, follow them back and send them a direct message, thanking them.

Top Tip: When direct messaging new followers, don't be too pushy. It is important to build up a good relationship before you start promoting your products or services.

The more you tweet, the more users are going to see your content, as long as what you're tweeting is interesting, useful and relevant. Tweet about interesting things happening in your industry, as well as promotional tweets. However, also try and tweet about more generic but interesting topics that are current.

Top Tip: Use popular hashtags to increase your chances of getting your tweets viewed by your followers and potential prospects.

It's Not All About Promoting Yourself

One thing I will vouch for here is that Twitter should not always be about promoting yourself. If you do this, it looks too forced. You need to mix up your Twitter content as much as you can. Tweet images and quotes, as well as the things I mentioned in the last point. Try and keep your Twitter timeline mixed. About 10-20% promotional tweets, 50% other content and then the rest might be retweets.

Top Tip: When you do make a promotional tweet, put some effort into it. Make sure it is eye catching and stands out in your followers’ timelines by using hashtags and images.

Promoted tweets are probably the quickest and easiest way you can get more visibility on Twitter but instead of taking time and effort, it is going to cost you money. Similar to Facebook ads and promoted pins on Pinterest, promoted tweets are paid ads in which you pay a certain amount so that more people in the ‘Twittersphere’ can see what you are offering. They amplify your tweets to a wider audience to increase your engagement.

Top Tip: Make sure to include a clear call to action. As tweets are only 140 characters, this is the most important part! Be sure to write this first and then create the rest of the tweet around it.

You've all heard of Periscope right? The live stream app that connects with Twitter? Periscope will increase your engagement on Twitter as it can give a face to your brand, making it more personable which can help build better relationships with prospects. It is also perfect for hosting live webinars and events, offering great advice and tips on a topic related to your industry that your followers will be interested in. Read more about what Periscope is here: What Is Periscope

Top Tip: Create an exclusive experience that offers something of unique value to your followers and prospects. This will help you get the best results.

Yes, there has been a lot of bad publicity surrounding Twitter at the moment and #RipTwitter has even trended worldwide. However, no matter what, the Social Media platform is still a fantastic way for a business, in any market, to increase their online visibility and ultimately generate leads and sales. What are your thoughts on Twitter at the moment? Would you like to see it add an algorithmic timeline? We would love to know, leave your comments below... 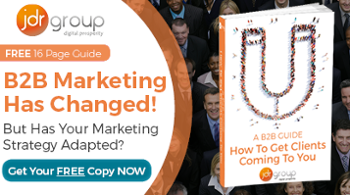 Twitter is the first place many of us now go to see the latest news being shared, what is most...

In order for Twitter to be an effective B2B tool, you need to give careful consideration to...